Although the story originated a long time ago, in a galaxy far, far away, Star Wars has arguably never been more popular than it is today. Aside from watching the shows and playing with the toys, kids also love to dress up as their favorite characters.

Even though they don’t typically display much personality in the stories, Stormtroopers are a surprisingly popular character – especially among younger kids. Looking for a great costume for Halloween or any other occasion? Our complete guide to the best Stormtrooper costumes of 2022 has a variety of options for any age or budget:

A comfortable, detailed costume based on the look from The Force Awakens which includes a deluxe jumpsuit and full-head helmet.

The Force Awakens is a relatively recent Star Wars entry in the franchise, so many kids are familiar with Stormtrooper designs from that film. This deluxe costume features detailed foam stormtrooper armor with a belt, boot tops and a two-piece helmet. A blaster is available but sold separately.

Although recommended for those at least four years old, this costume is actually capable of fitting kids much older and bigger. The large size fits anyone between 54 and 60 inches tall weighing up to 100 pounds.

Full-body classic costume made from foam and fabric.

This Stormtrooper costume is detailed to resemble the classic look from the first trilogy. Made from a combination of 100% polyester fabric and 100% EVA foam.

The combination of black jumpsuit with attached foam armor pieces helps create a realistic Stormtrooper look – but the costume is also easy and safe to move in. Includes boot covers, too. From head to toe, a classic Stormtrooper replica costume great for individuals or even groups.

This intimidating black-and-white Judicial Stormtrooper costume is featured in The Last Jedi.

The Judicial Stormtroopers prevent treason in the ranks, and play a prominent role in The Last Jedi. This authentic costume is Disney-approved and highly detailed.

Features a full bodysuit with separate belt and gloves. Black pauldrons bulk up the shoulders and feature a First Order insignia print. Plus, the bodysuit is segmented with vinyl covering and screen art.

The black-and-white mask stands out from the other Stormtroopers on the field of battle (or costume party). Mask fits securely with an elastic band and self-stick fabric. See-through mesh on the eyes and mouth allows for visibility while maintaining a cool Stormtrooper look.

Foam-padded jumpsuit designed to resemble the Executioner Trooper, among the toughest soldiers in the Empire.

This is an officially licensed replica of the Execution Trooper with black carbon-fiber accents and a First Order symbol. Costume includes a foam-padded jumpsuit with belt, mask and boot covers.

Helmet isn’t a full helmet but does consist of both front and back sides to cover the majority of the head. Visor is made of black mesh which won’t obscure vision.

Costume is made from Rubie’s, a family-owned company which has been making costumes since 1950. Sizing is different than clothes (usually larger) so be sure to consult the sizing guide before purchase.

The detailed black mask has a see-thru screen for a wide field of vision. Two Empire symbols decorate the upper part of the mask. This costume is inspired by Star Wars Rebels, a popular animated TV show set before the first trilogy.

This lightweight costume is styled to look like the highly trained Art Troopers from the animated Clone Wars TV show.

The Advanced Recon Force (ARF) troopers are survival experts with more stealth and speed than the rank-and-file troops. These specialty troopers play a prominent role in popular episodes of The Clone Wars.

The costume is a polyester jumpsuit which is lightweight and easy to move in. Printed with green-gray camouflage for (pretend) forest firefights. Available in sizes four through 12.

Kids can dress up as their favorite intergalactic bounty hunter with this deluxe costume featuring body armor, gloves and two-piece mask. 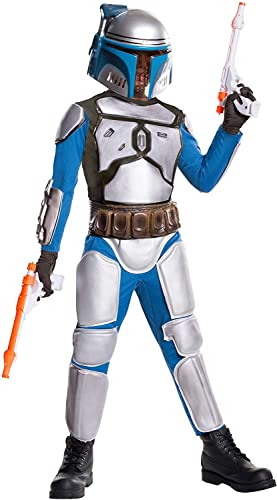 Jango Fett is the basis for all of the clones which eventually became the Stormtroopers, as well as the father of Boba Fett. He plays a key role in the entire Star Wars saga and usually a fan favorite.

Match your costume to your child’s with this full-body Stormtrooper costume from The Force Awakens.

Because there are multiple Stormtroopers in the story, these stormtrooper costumes are often great for groups or families, too. Dress up as a Stormtrooper alongside your son, daughter, niece, nephew or other child.

This 100% Polyester costume has foam stormtrooper armor with molded detail. Easy to move in, lightweight and comfortable. Includes a two-piece helmet, belt and 3D boot covers. Available in Standard and X-Large sizes.

What are the Different Types of Stormtroopers?

In the Star Wars universe, Stormtroopers are the most common enemy soldiers. They typically wear a complete set of body armor and full helmets. Their outfits are mainly white with black accents.

There are over 90 different types of Stormtroopers. But most costumes are divided into just a few categories:

These are the standard bad guys from the original films. They have relatively simple costumes with no extra features or insignias. In the story, they serve the Galactic Empire under Emperor Palpatine and Darth Vader.

The Force Awakens and The Last Jedi

These are the Stormtroopers from the more recent films. They have an upgraded look with more intricate body armor. These Stormtroopers serve the First Order, which is led by Supreme Leader Snoke, Kylo Ren and Captain Phasma.

The Stormtrooper ranks are populated by a few specific classes beyond the standard foot soldier. Execution troopers, Judicial troopers and others are featured in key roles throughout many of the new movies.

Kids definitely know the difference. If your child is a fan of a specific Stormtrooper character from the Star Wars universe, you’ll want to find a costume which is an exact match.
Fortunately, pretty much every type of unique Stormtrooper who plays any significant role in the films will have a kid’s costume available.

Need a refresher on your Star Wars history? Check out A Brief History of Star Wars Toys to learn more.

How Do I Find the Best Stormtrooper Costume?

Level of Detail and Accuracy

Star Wars fans are known for their passions. Costume details matter. Your child will likely want a highly detailed costume. Detailed costumes will have designs molded into the foam, insignias and other features.

Generally, movable sections of the costume will be made of felt or vinyl. Firmer plastic sections will make up the body armor portions and the mask.

Full helmets often look the coolest but will likely be the most uncomfortable. They can feel tight and will often quickly grow hot. A face mask allows for more ventilation but doesn’t completely encase the head.

Stormtrooper costumes typically don’t include accessories. But you might want to buy them anyway, because they often help complete the costume.

The blaster (laser gun) is the most common accessory. However, the flamethrower is another popular accessory, as a flame-thrower equipped Stormtrooper plays a significant role in The Force Awakens.

Pretend weapons do have some safety concerns. Most Star Wars “weapons” will be colored a bright orange. This helps differentiate the toy from a real gun. But fake weapons are still best for at home play. They shouldn’t be taken to school or carried around outside while trick or treating.

While the more detailed costumes are often look great, they might not be the best choice for younger kids. Instead, a simpler costume and mask are often easier to wear. Avoid full helmets and body suits if the child will mainly be running around and playing. Simple front masks and vinyl front apron-style costumes are often more comfortable, especially for fussy little ones.

How Do I Know if a Costume is Safe?

While your child will primarily be concerned with the costume’s coolness, your number one job is to make sure it’s safe.

First, is the costume easy to move in? Finding the proper size plays an important role here. If the costume is too big, the child has an increased risk of tripping and falling. Too small and movement can be constrained.

There are no universal sizing guidelines for costumes. Instead, each brand will be different. You’ll need to consult the sizing guidelines specific to the costume you intend to buy. Generally, costumes are one to one-and-a-half sizes larger than normal clothing.

Also, be aware of any loose, flowing elements. They can accidentally get caught on objects. With Stormtrooper costumes, pay special attention to any boot elements which strap to the shins and cover the shoes. Make sure they don’t interfere with the ability to walk.

Visibility for the wearer is another important factor to consider. Most costumes will have either traditional eyeholes or a see-thru felt screen. Usually, the felt allows for a wider field of vision. While the felt can obscure vision in darkness, generally a felt screen provides more visibility than eyeholes, which often don’t line up properly with the eye.

Is this Costume Suitable for Trick or Treating?

While costume safety is important in general, there are special safety considerations if your child plans to go trick-or-treating in neighborhoods.

The costume must be easy for others to see. Fortunately, Stormtrooper costumes are usually pretty visible due to the majority white coloring. However, you’ll still want to add reflective tape to the child’s legs, shoulders and arms. Additionally, children should carry flashlights or glow sticks.

Additionally, all trick-or-treaters must be careful of traffic. Only cross at crosswalks. Don’t try to cross the street between parked cars. Also, be careful around cars which are turning or backing up as that’s when driver visibility can be impaired.

Are Stormtrooper Costumes Suitable for Groups?

Absolutely! Stormtroopers are an army, so people are used to seeing them in large groups. When shopping for groups, you’ll achieve the best look if everyone is wearing the same type of costume. Fortunately, many Stormtroopers are available in both child and adult sizes. Works great for family or classroom dress-up fun.

Although they might not be great shots, Stormtroopers make great costumes. Kids love the detailed replications of their favorite type of Stormtrooper. Parents will love how the stormtrooper costumes, when properly fitted, are generally easy and safe to move in with plenty of visibility. If your child wants to be a Stormtrooper, plenty of excellent options are available.