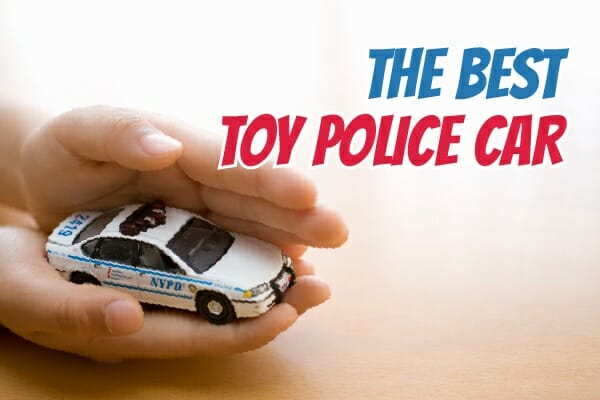 If only they had cool toy police cars like this when we were kids! Today’s toy police cars come loaded with new features, offer cutting-edge technology, and of course, have the police lights and sound effects that kids love. Why not encourage your child’s creative development by buying a toy vehicle that he/she controls and uses to tell stories?

Many toy companies have released police vehicles, each one offering a unique experience and a host of exciting features. Upon our review, we noticed that some toy police cars scored better for various categories, such as toddler-aged, younger, and preteens.

In this article, we’ll review a list of the top-rated and best-selling toy police cars on the market today and then provide you with more information so that you can decide which model is best for your family.

Many of these cars have similar features, while some of them have very opposite qualities, designed for different age groups. While it’s difficult to choose just one toy as #1, since preteens have different tastes than toddlers, we feel that all of these toys ranked high in terms of quality, fun, and new cutting-edge features.

Notice we divided each review into product details, pros, and possible cons that might affect your decision. We’ve also summarized the overall scope and style of each option to give an easy reference point as you shop.

Friction powered police car is loud and flashy, just like you’d expect from a cop car. 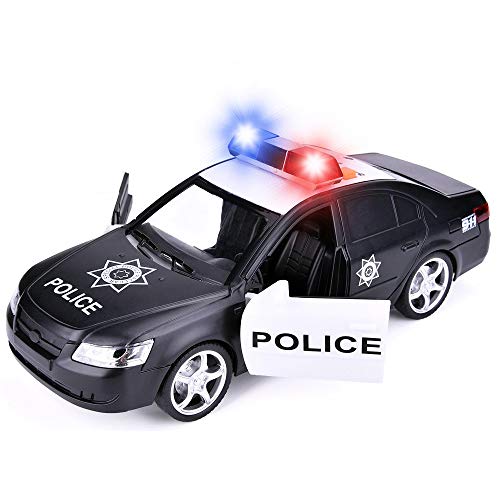 The Liberty Imports Friction Powered Police Car is a friction-powered toy car, meaning kids simply push the car forward a few times, build energy, and then let it roll forward. The friction mechanism on the wheels allows for a more natural system than the remote control and is ideal for younger children.

Even better, the battery-powered toy police car has lights and sounds to accompany the friction power. Kids can push four sound buttons to activate options of Siren, Reverse, Honk, and Start Engine. The lights also flash as the car propels ahead. Inside, you will find a detailed interior and two movable doors for easy open and close.

Small, friction powered, and a fitting tribute to the Ford Mustang. 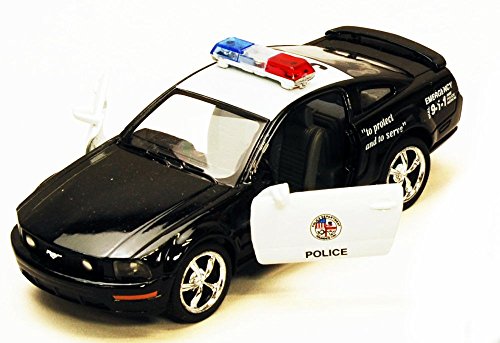 The Kinsmart Ford Mustang GT Police 2006 Toywonder is a smaller car, only measuring 4x4x4 inches, which is small enough to fit in a person’s palm. However, the comfortable friction-operated performance, both push and pull, makes controlling the car easy to learn. For faster speed, pull back rather than push forward and watch it ride.

The police car also has two doors that open and close, and the design comes from the real-life 2006 GT Ford Mustang, converted into a police car. The officially licensed toy means this is a toy replica designed with great detail in mind. The body has die-cast steel as well as plastic parts. 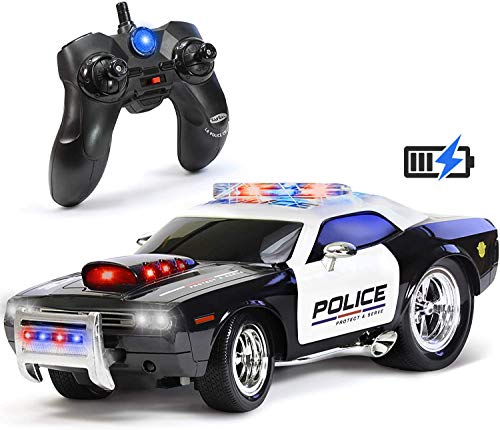 The Kidirace RC Remote Control Police Car is ideal for older kids who want the feel of a remote control police car and a smooth ride at that. Batteries come with the toy, and kids can expect a siren sound with flashing lights. The remote control race car also has two other sounds: a honk and an engine roar.

The remote-controlled car operates on a unique 2.4Ghz frequency, which gives it a smoother drive, a more extensive range, and less interference from other nearby remote devices. The device can also operate with six other vehicles nearby without any effect on performance. This rechargeable toy car provides 30 minutes of battery time on a full charge.

The car has fast response, the ability to handle tight turns, and top racing speeds. While it is a remote-controlled unit, it is still appropriate for toddler-aged children of 4-7 years old because of bigger buttons and switches on the remote.

You may also be interested in: Our guide to the 8 best firetruck toys for kids

This sturdy remote control car can take a hard crash, all the while shining in a beautiful Mercedes style. 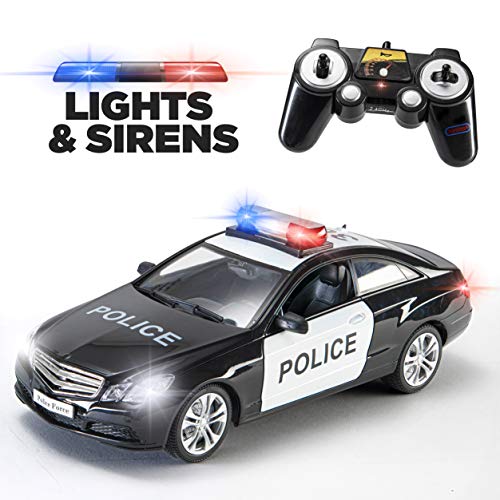 The Prextex Remote Control Police Car is a powerful remote control car with a 60-foot range. In addition to high speeds and a durable ride, the Prextex RC police car has a siren and flashing lights to make it look and sound like a mini-police car. Additional noises include acceleration sound effects and brakes. The vehicle is built for younger children (3-5 years or older) and so can withstand minor to medium crashes because of its solid construction.

The car is powerful enough to drive on the carpet and drives even better on flat surfaces. Buttons on the remote control remain simple and easy to understand. The left joystick controls acceleration while the right joystick controls turning. The car has the style of a Mercedes coupe, and the details in construction will impress adults as well as children.

Lamborghini cop car, fun to look at, and with friction-power, it’s easy to start speeding. 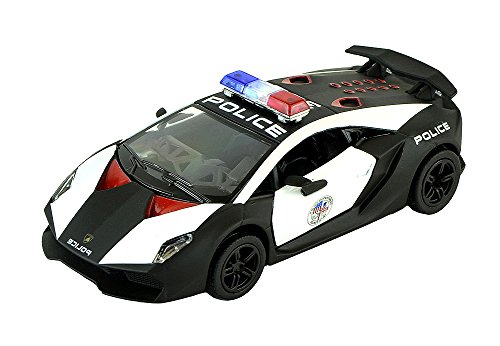 The Lamborghini Sesto Elemento Police Car is officially licensed to replicate a mini Lamborghini model, converted into a police car. Even better, the vehicle is durable, thanks to a combination of steel and plastic parts. The vehicle’s doors open, and it accelerates by pull-back operation. Pull back and wait for the click. Then let it speed.

The car is smaller than other similar toys. Along with its high speed, these factors increase the recommended age to eight and up. The ideal surface for maximum speed and performance is either hardwood floor or tile.

The most creative option, as you can remotely control both a police car and a police robot. 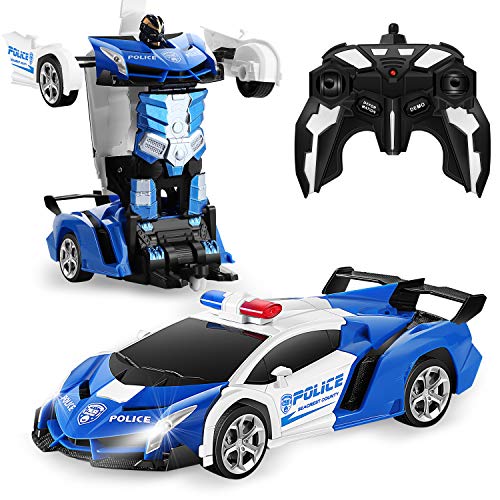 The Fig Roll Transform Robot Police Car is not an official “Transformers” toy, but kids all know he could exist in the same universe! This police car not only transforms into a robot but is also remote control-ready either in robot or “car mode.” Thanks to a 2.4 GHz reliable transmitter system, you can switch back and forth from robot to car with just one touch of a button.

Charge the toy for an hour, and it will last a half-hour. The remote control unit works from up to 20 meters. Remote controls move the robot/car forward, backward, or even at 360-degree angles for more versatile performance. Your kid will also love the engine sounds and flashing lights. 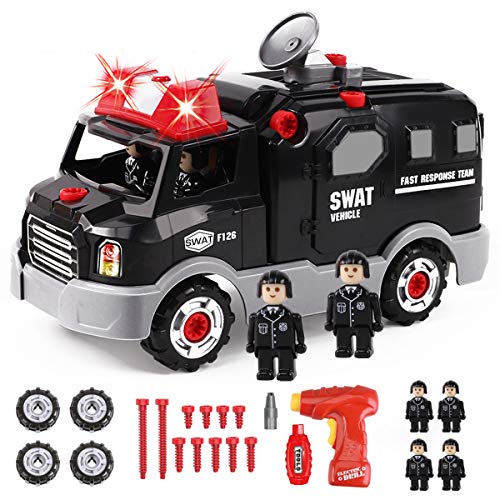 The Gilobaby Take Apart Police Car made our list because it’s a unique option. The toy set allows children to not only drive their police car but build it from the ground up. Children start by creating their car from a variety of parts, screws, and accessories, which requires assembling and using a child-speed drill.

The complete set comes with 32 pieces, including four policemen that resemble larger Lego-like figurines. The policeman figures have movable arms and legs and fit inside the car. Once your child finishes building the set, he or she can drive the vehicle and operate a siren, horn, and other sound effects.

Gilobaby made their Take Apart police car set according to the STEM curriculum, which represents the idea of educating students in four key disciplines: science, technology, engineering, and mathematics. Gilobaby has made a toy ideal for education as well as fun for kids because of its building theme.

Why Buy Toy Police Cars Instead of Downloading an App?

Most parents would find it convenient to download a police game app or buy a video game instead of a toy. However, the best reason to buy a toy police car is not merely nostalgia for old pre-gaming toys; it’s because toys encourage roleplaying abilities in children.

According to research by the Official Journal of the American Academy of Pediatrics, children playing with parents and peers help promote “social-emotional, cognitive, language and self-regulation skills.”

These skills can help children later develop social skills, later on, not to mention better relationships with authority figures. Roleplaying with toys enhances brain structure and “executive function,” which will help children pursue goals and ignore distractions later in life.

According to some anthropological studies, the free and playful lives of children encourage adult development. In contrast, researchers have found a connection between the decline of roleplaying and an increase in child psychopathology.

To a child, toys do not represent products as much as they represent characters. Acting out roles and exploring new identities helps to develop problem-solving skills, according to research from Tessa. When children play with toys and inhabit “characters,” they try to understand multiple perspectives of people.

They also learn to “play house” as well as explore various career fields by roleplaying. No wonder many schools and daycare centers provide toys that encourage roleplaying, as well as building kits. As they grow older, toys help them to come up with logical solutions, diplomatic dialogue, and more empathy for other people.

You will notice that most toys for children have “recommended ages.” The primary reason being that small children might try to bite or swallow small parts if they don’t understand how to use them.

Therefore, younger children would require bigger and softer toys to toss around.

Older toddlers and preteens will admire some complexity in their toys, such as DIY building kits, remote control devices, or other technology-focused products.

When shopping for younger children, make sure toys have “BPA-free” and “phthalate-free” parts. That way, even if your kid chews on the toy away from view, it won’t run the risk of poisoning him or her.

Look for smooth edges on these vehicles that won’t cut the skin, as well as toy police cars built for durability. Some reviewers complain that certain toy cars crash too quickly and lose important parts – which can very often upset children. For the best results, supervise your child’s remote control play, just to make sure he/she understands the risk of crashing into surfaces.

Most toy police cars sell for cheap and so replacing broken items will not cost much. Some exceptions might include higher-end models, usually collectible cars based on real automobiles. However, all of our choices for the best toy police car ranked high in price, quality, and features.

As we’ve seen, you have quite a selection of toy police cars to choose from, with a host of functions ranging from high tech remote control technology to more simple friction-based rides. Remember, the most critical factor in making a choice: finding a toy your child will like and instantly responds to upon seeing it.

Enthusiasm for the toy means he’s more likely to roleplay with it, developing these social skills later on. If nothing else, maybe these toys will help teach children not to speed later on in life, just in case a faster police car is waiting nearby!

Most children love police car toys because they make noise, drive fast, and resemble real-life police cars that they might see on the highway. Surprise your kids this season with a brand new toy and watch their face light up!