Look in a book!

When problems occur in life, you’ll find help in a book. That’s the message delivered in every episode of Super Why, an educational show for kids which airs near-daily on PBS.

Super Why is popular among kids between the ages of three and six. Aside from the show, a variety of Super Why toys are also available. However, the show stopped creating original episodes years ago, which can make finding the right toy difficult.

Fortunately, reading is here to save the day. Here’s a closer look at the best Super Why toys for 2021, plus a quick guide to their benefits:

Zap and Learn Why Writer

An electronic toy which helps kids as young as three learn to hold and write with a pencil.

The Why Writer is a motion-activated toy with a series of electronic games. Kids hold it like a pencil and write when playing.

The games are all educational. Two interactive modes help teach spelling, vocabulary, and other reading skills. Plus, even holding the toy has benefits. Kids develop fine and gross motor control needed to write with a pen or pencil.

The built-in screen displays words and images as they relate to the specific game. Additionally, the handle is decorated with an illustration of Super Why (Whyatt’s super alter-ego).

Super Why: The Three Little Pigs

A colorful picture book which adds a Super Why twist to the classic tale of the three little pigs. 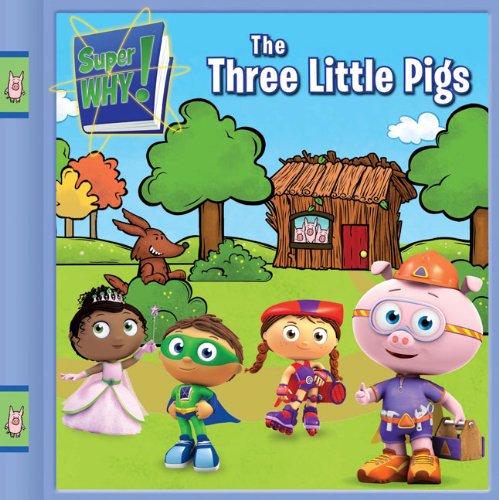 Encourage kids to read along with their favorite episodes. Super Why’s version of the Three Little Pigs is an all-new twist on the familiar story. The Super Readers meet with the Big, Bad Wolf – and help him make friends! The story touches on themes of friendship and cooperation.

Of course, it also focuses heavily on reading, too. Saving the day requires the use of opposite words. Kids also learn about rhyming.

The story closely follows a fan-favorite TV episode. Kids are encouraged to read the book while watching the episode so they can see the words as they are spoken aloud.

The book has 24 pages. It’s recommended for kids between the ages of three and five.

A two-DVD set featuring three of the most popular Super Why stories. 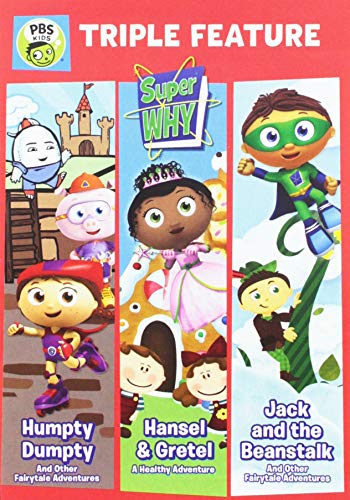 The Super Why Triple Feature contains three of their most popular adventures: Humpty Dumpty, Jack and the Beanstalk, and Hansel and Gretel. Each movie changes the familiar story by inserting the Super Why characters. It’s a fun change to the familiar tales.

Although the episodes air on TV, many parents prefer to own them on DVD. They’re great for road trips and other travel. Plus, watching the episodes multiple times helps kids understand the lessons.

A holiday set of shatterproof ornaments featuring all the major Super Why heroes. 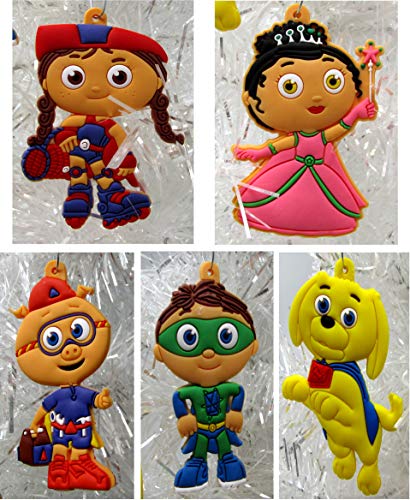 Brighten up your Christmas tree with this set of six Super Why ornaments. You get Whyatt, Pig, Joy, and other main characters. Each of their superhero outfits features a festive twist on the original style.

The ornaments are made from shatterproof design. They’re unlikely to be damaged even after a big fall. Each ornament is about three inches tall with a pre-drilled hole for a hook.

Add the Super Readers to any room with this set of four giant wall decals. 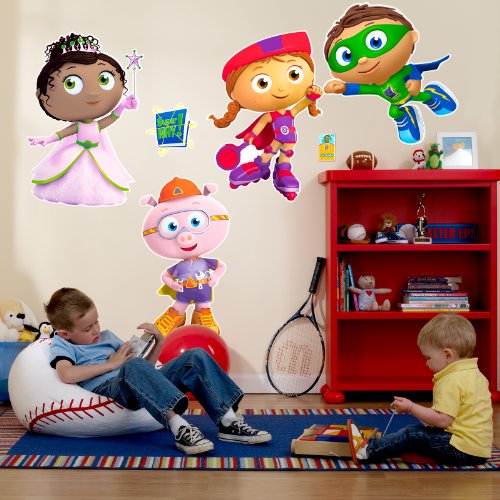 These giant wall decals are a fun, easy way to decorate your child’s bedroom, playroom or anywhere else with smooth walls. Use the squeegee to affix the decals the wall securely. However, they don’t leave behind any markings when removed.

The set includes six wall decals: Four feature the Super Readers, one has the Super Why logo and the last decal covers a light switch. Aside from the decals, you also get a three-inch yellow Squeegee used for easy application.

The largest decal is 18.5 inches wide by 27 inches high while the smallest (the light switch cover) is about seven inches. Once pressed against the wall, they’ll stay for years. However, they also peel off easily without damaging the paint.

A Super Why board game which helps younger kids learn reading, spelling, and other skills. 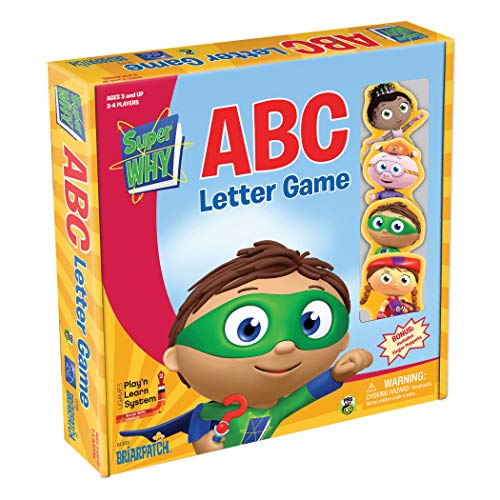 Introduce kids to the old-fashioned family fun of a board game with the Super Why ABC Letter Game. It’s an engaging, relatively simple game for between two and four players ages three and up.

The set includes the board, four playing pieces, 110 question cards, a spinner, and instructions. Players move around the board answering questions about the alphabet, words and other reading-related subjects.

The game features characters and themes from the show. Pig, Super Why, Wonder Red, and Princess Pesto are all prominently featured.

Super Why!: ‘Twas the Night Before Christmas and Other Fairytale Adventures

A set of holiday-themed Super Why movies which don’t frequently air on TV. 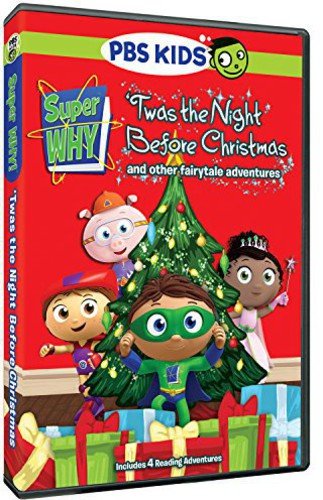 Super Why!: 'Twas the Night Before Christmas and...
(320)
Check Today's Price

Although the Super Why TV show airs on PBS regularly, the movies in this set are usually only aired during their associated holiday. However, this set allows you to watch them anytime. It includes ‘Twas the Night Before Christmas, The Ghost Who Was Afraid of Halloween, The Three Features, and The Stars in the Sky.

Each movie is about a half-hour long. The films follow the same general format as the regular TV only with an emphasis on Christmas and Halloween. 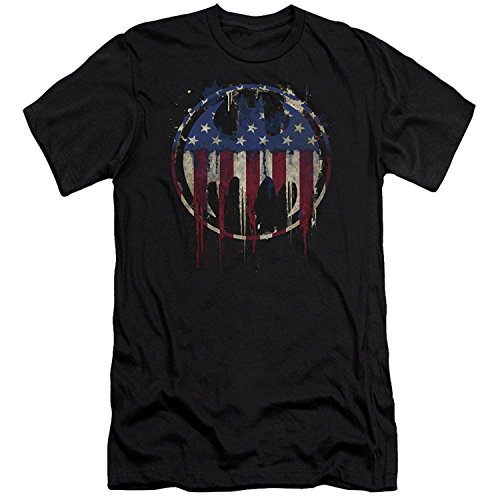 Super Why apparel isn’t easy to find, but this shirt is an excellent option. It features a detailed illustration which won’t fade or crack even after many trips through the washing machine.

It’s made from 100% cotton, so it stays comfortable and breathable, even in hot weather. Turn it inside out before drying it on the low setting.

What is Super Why?

Super Why is an educational kid’s show which ran for several seasons until 2016. Although new episodes aren’t on the horizon, reruns remain popular on PBS Kids.

It’s a CGI animated show with a bold, colorful style designed to appeal to younger kids. Every episode focuses on the power of reading and books.

The show stars Whyatt Beanstalk. He’s the younger brother of Jack, from the Jack and the Beanstalk story. Whyatt lives in Storybook Village, populated by many characters from classic fables.

Every episode starts with Whyatt or one of his friends facing a Super Big Problem. It’s usually a relatively minor issue relatable to kids.

Most of the episodes follow a similar pattern. A problem in Storybrook makes the characters jump into a book in search of a solution. The book is usually a familiar fairy tale with a message similar to the situation the characters face in Storybook.

Whenever Whyatt and friends jump into a book, they transform into Super Readers. As Super Readers, they wear capes, domino masks, and superhero costumes. The Super Readers team up with the fairy tale character to help save the day in the story and then later in Storybrook Village.

Characters earn Super Letters each time they overcome an obstacle. By the end of the episode, enough Super Letters have been earned to spell out the solution to the original Super Big Problem.

What are the Benefits?

Each episode of Super Why combines superheroes, fairy tales, and moral lessons. While the setting can seem a bit jumbled to adults, young kids often love the show because it combines familiar images and ideas.

However, the superheroes and fairy tales are primarily an attention-grabber. The main focus of the show is educational. Each episode teaches a variety of basic reading skills. Kids learn about the following:

Super Why is made for kids between the ages of three and six. It’s ideal for those somewhat familiar with reading and books but who are still learning letters and words.

Lessons are kept simple. Each episode focuses on one Super Story Answer. It’s a word or phrase which sums up the solution to the episode’s Super Big Problem. Each episode ends with a catchy song to help kids remember the main themes.

Super Why toys have some educational benefits, but most of these toys aren’t considered educational. Instead, their main purpose is to keep kids interested in the show, which does have substantial learning benefits.

Super Why doesn’t have new episodes anymore, but it’s arguably more popular than ever. Unlike many shows made for kids, Super Why does an amazing job of blending entertainment with education. Repeated viewings help kids teach kids about spelling, vocabulary, and otherwise improve literacy.