Kids love Octonauts! The Octonauts are a team of animals who explore and protect the sea and all its inhabitants. They star in a long-running TV series and several books.

If your kid loves the show and stories, they’ll likely also want some Octonauts toys to play with. However, finding the right toy isn’t always easy because most parents aren’t too familiar with the characters.

Fortunately, the Octonauts aren’t the only ones who love to explore. We’ve searched deep into the toy aisles to find the ten best Octonauts toys for 2022. Plus, you can also learn all about the Octonauts in our quick and easy buyer’s guide:

A detailed playset which includes the three main characters and their famous Gup-A submarine. 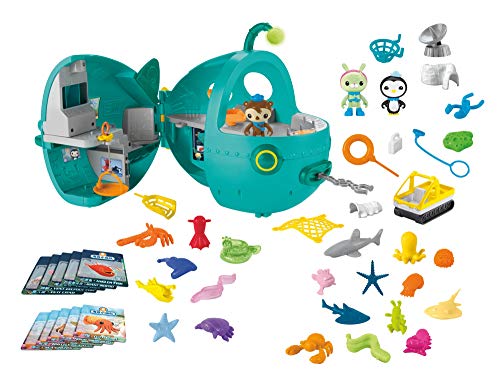 Double the adventure! The Gup-A Megapack is a...
Check Today's Price

The Gup-A Megapack is a solid choice for fans of the show who don’t have many Octonauts toys. The set includes most major characters, a wide variety of accessories and a vehicle. Kids love to play with them!

It includes Shellington, Peso, and Tweak. Plus, you also get 20 sea creatures, 14 accessories, and ten double-sided cards. Slide the cards into the monitor to select the next mission (it’s what the characters do on the show).

The Gup-A is the coolest part. It’s a detailed replica of the Octonauts’ main vehicle. Open it to reveal the captain’s chair, diving bell, central computer, and more.

A medium-sized playset with a vehicle and action figure which both floats in water and rolls on the ground. 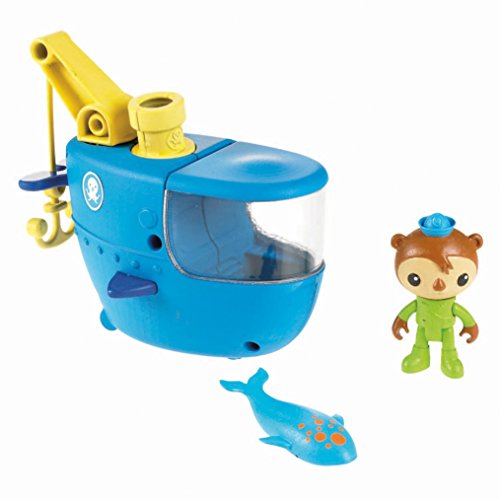 Your children will love Shellington and her Gup-C are ready for adventure. Both the action figure and vehicle are detailed, colorful, and durable. It’s safe for kids three and up.

The toy works both in the water and on land. It’ll float in a bathtub or sink. Plus, the wheels let it roll on just about any flat surface. Kids really like it!

Shellington has moveable arms, legs, and neck. The Gup-C moves, too. It has a towline which moves up and down.

The set also includes a toy whale who sprays water and changes colors. Kids love to play with them!

This Fisher-Price playset features the Octopod, which is the home base of the Octonauts. 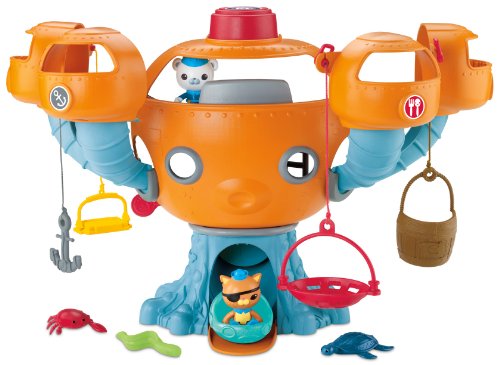 Sound the Octo-Alert! All Octonauts go to the Octopod!

Gather the whole team together at the Octopod. It’s the Octonauts’ undersea base of operations. The playset includes a detailed Octopod with over ten moving parts and two action figures.

It also includes a small Octo-Alert device which clips to a belt loop. Press the button to activate the Octo-Alert. It plays familiar phrases from the show to help kids feel like they’re part of the action.

The Octopod is a major part of the show, making this toy a must for any Octonaut super fans. It connects with the Gup-A and other playsets.

Bring the Octonauts to school with this insulated lunch sleeve featuring a detailed illustration of the characters springing into action. 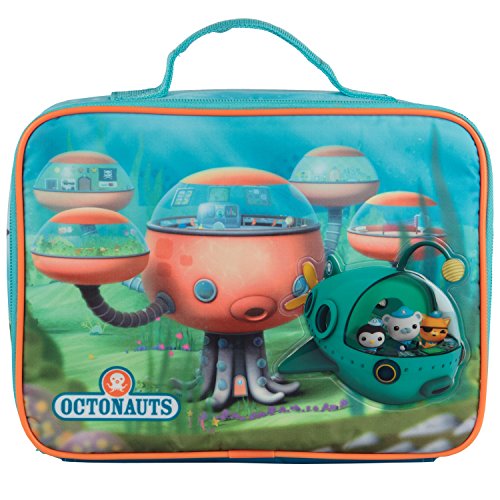 Kwazil, Barnacles, and the other Octonauts are here to save you from a boring lunch. This insulated lunch box sleeve keeps food warm or cold for hours. A mesh pocket on the back provides additional storage space for non-perishables.

It’s 8.5 inches high by 11 inches wide by three inches deep. Although not huge, it provides enough space for a sandwich, chips, and a few other items.

It’s safe to use with no lead, BPAs, or toxic chemicals.

Hit the road with these four mini, metal vehicles which roll on practically any flat surface. 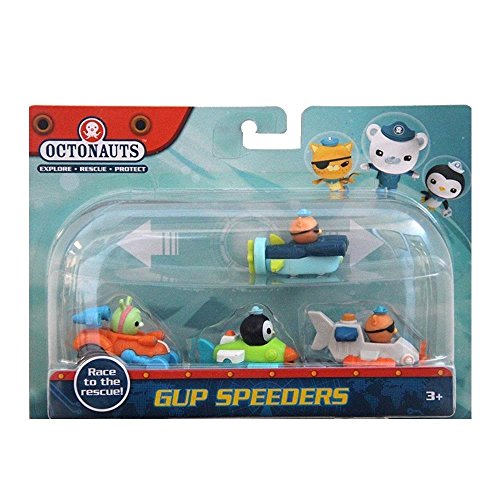 Not all of the Octonaut’s best adventures take place underwater. These vehicles feature metal wheels which roll on almost any flat, non-carpeted surface. They’re roughly the same size as Hot Wheels and Matchbox cars. Kids love to play with them!

Each pack includes four vehicles with different characters. Unfortunately, the characters are random, so you’re unable to pick specific favorites.

This five-pack features the Vegimals, a group of half-vegetable, half-animal creatures who help the Octonauts. 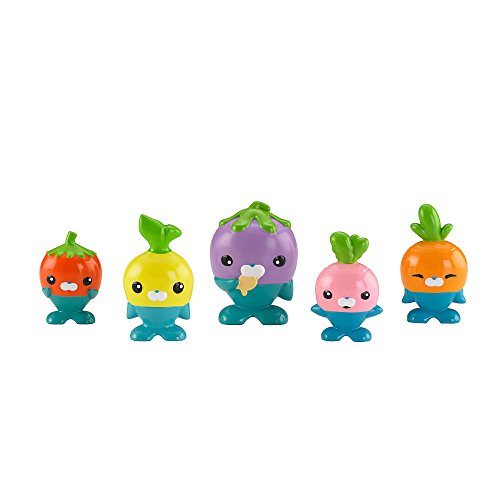 Part animal and part vegetable, the Vegimals are underwater animals which frequently help and interact with the Octonauts. This five-pack features Tunip, Tominnow, Codish, Barrot, and Grouber. It also includes a kid-friendly booklet explaining more about the Vegimals.

The figures are made from durable rubber. Although they’re roughly the same size as the Octonaut figures on our list, the Vegimal figures are hollow instead of solid. They’re safe for kids three and older.

This 40-page picture book spins a fun tale involving the Octonauts and Vegimals. It’s packed with tons of details for Octonaut super-fans! 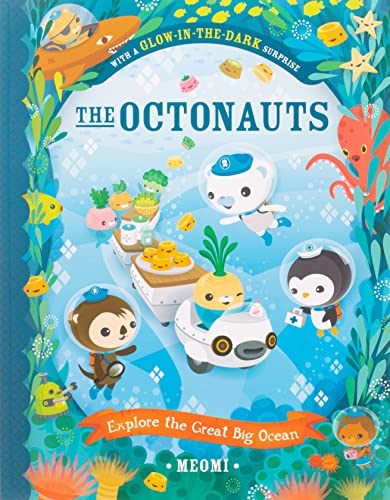 Kwazil, Barnacles and the Octonauts Explore the Great Big Ocean is a colorful, exciting picture book for kids five and older. The story stars Tunip the Vegimal and his quest to learn about his family’s history. He enlists the Octonauts for a fun trip around the world.

The book is written and illustrated by Meomi, the two-person team who created the characters. 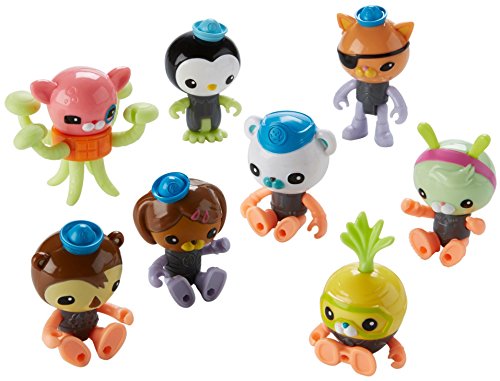 Each figure is between two and three inches tall. They all have poseable heads, arms, and legs. They can even sit down.

Overall, it’s a well-made play rescue set featuring all of the main characters. Plus, the glowing costumes add a surprise splash of extra fun.

A 12-inch plush Peso the Penguin toy. Other characters are also available. 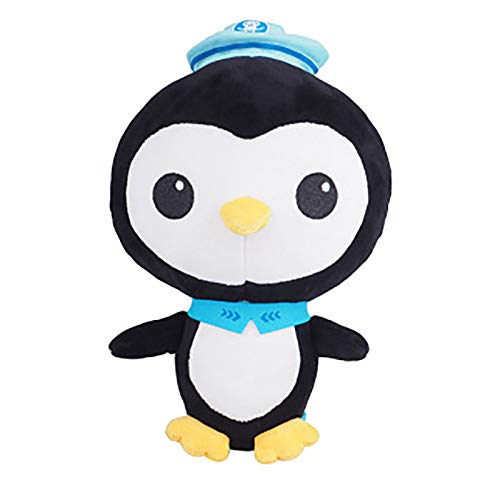 The Octonauts are cute, cuddly, and make perfect bedtime pals. Kwazil, Barnacles, and other major characters are available as plush toys. You can find Peso, Professor Ink, Shellington and many more.

Each toy is about 12 inches tall. They’re stuffed with high-quality cotton and contain no toxic materials. The exterior is soft and easily cleaned with a damp cloth. 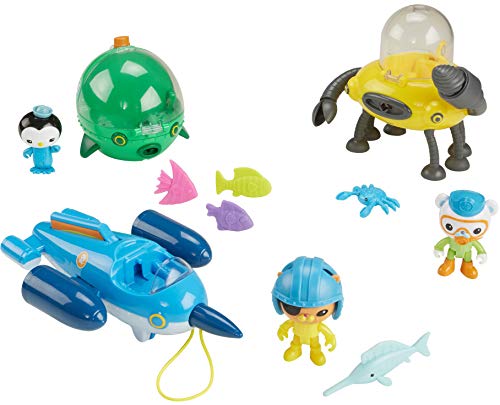 Get ready for rescue missions on land and in the water. The Fleet Mega Pack includes vehicles and characters. You get the Gup-R, Gup-E, and Gup-D (converted into Crab Mode). Plus, you get Barnacles, Kwazii and Peso.

All vehicles and characters have loads of detail. Plus, the figures have movable arms, legs, and heads.

The vehicles are completely waterproof. You can play with them in the sink or tub. They even float! Overall, it’s a large set with both vehicles and characters which any Octonauts fan will love. It’s for kids three and older.

What are the Octonauts?

The Octonauts are a team of eight anthropomorphic animals who embark on underwater rescue adventures. Each story focuses on teamwork and friendship. Plus, the stories focus heavily on teaching kids about marine life.

The Octonauts are rather amazingly international.

Octonauts is a British TV play, created by Irish animators, based on a series of children’s books written by an American and a Canadian duo. The show debuted on the BBC in 2010.

In 2012, Disney began airing the show in the US. However, they made a few changes. The character’s English accents were redubbed with American and Hispanic ones. Additionally, some character names were changed.

If you’re buying a toy for someone in the US, make sure it reflects the American version of the show. That’s especially important if the toy uses character voices. Kids want toys to sound like the characters they’re familiar with.

What are the Benefits of Octonauts Toys?

Action figures and stuffed animals aren’t necessarily considered educational toys. They are play toys. However, they will draw kids to the TV shows and books, which then teach kids about marine life and general science.

Every play episode follows a specific formula. The Octonauts explore a new part of the sea. During their exploration, they encounter a creature they’ve never seen before. The creatures discovered are real and not anthropomorphic.

During the episode, the Kwazil & the Octonauts learn some (true) fact about the animal. They use their new information to escape or otherwise save the day. Learning a basic fact about a real marine animal is a major plot point of every story. Two real-life marine biologists provide behind-the-scenes input on all the science.

What are the Best Octonauts Toys?

Fortunately, most of the toys are compatible with one another. Characters from one set can fit into the rescue vehicles from another and vice versa. You’ll want to check the specifics of each toy beforehand, but sizes and styles are fairly uniform across all sets.

Focus on finding your child’s favorite characters or vehicles. Any fan of the show likely has one or two they like best. Here’s a rundown of the main Octonauts:

Aside from the characters, vehicles play a key role in the show. Here’s what parents should know:

Finding Octonauts toys like Kwazil is usually fairly simple. Most of the toys maintain consistency across all sets, so any toys you give a child will likely fit well with any Octonauts toys they already have. The key to finding the right toys is knowing which characters and vehicles your child likes the most.

The Octonauts help kids learn about science, oceans, animals. Finding the right toys helps kids develop an interest in the show and all the educational benefits available from watching it. Most children really like them!