Monster High fans are already familiar with the show’s famous catchphrase, but parents can feel confused when first entering the halls of the haunted high school. Monster High is a series of films, TV shows, and toys, with Monster High dolls the most popular type of toy by far.

Looking for a gift which is scary good? Here are the best Monster High dolls for 2021 plus a parent-friendly primer on the characters and series:

The daughter of Count Dracula, Draculaura is one of the main characters of Monster High. Here she’s showing off her school spirit in a Monster High cheerleading outfit. It features sporty shoes, a pink skirt and molded bodice with Skullette design (as featured in the show).

The skirt and shoes are removable so you can dress her up in different outfits. However, the bodice is a permanent part of the doll.

While the doll has no moveable joints, the face is extremely detailed and cute. It’s a good choice for kids who like dressing and displaying their dolls.

Frankenstein’s daughter has an electric style with a bold red top, blue boots, and a black skirt. Her shirt even features the Monster High school crest.

The doll moves at the neck, shoulders, and hips. However, the wrists, elbows, and knees are not articulated.

Frankie is the same size (11 inches tall) as the other dolls in the Ghoul Spirit line. The clothes are even interchangeable. Kids can collect the entire cheerleading squad! 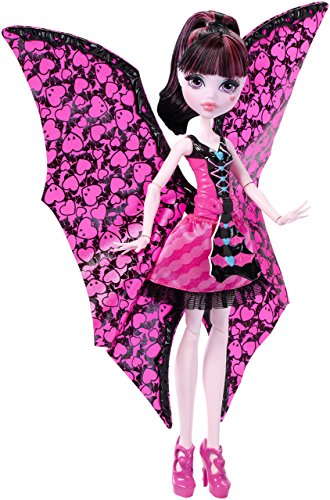 Simply press a lever on Draculaura’s bodice to transform her pink overskirt into a pair of body-sized wings. Return the lever to return her look back to “normal.” It’s a nod to the show, where Draculaura transforms into a bat at will.

As a teen, she wears a pink bodice with white laces, a pink skirt with heart designs and pink flats. The skirt folds out into the large wings, with the same vibrant pink color and heart pattern.

The doll’s face is detailed and expressive with large eyes, fine black and red hair, and a small heart birthmark on the cheek. However, her look here is slightly different than the show and other doll lines.

Frankie and her sister Alivia are having a backyard party complete with party dresses and BBQ accessories. 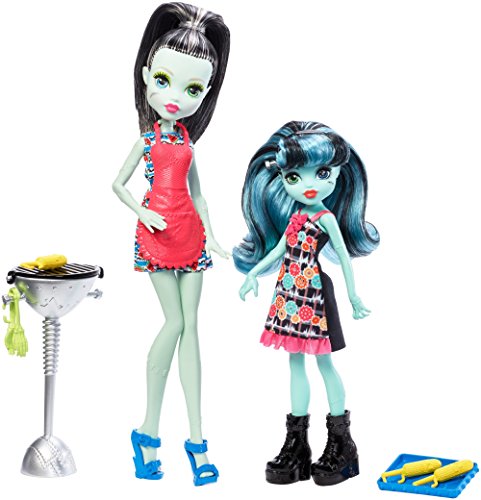 Meet the Steins! This two-pack includes not only Frankie Stein but her sister Alivia, too. These daughters of Frankenstein are ready for BBQ fun with the included grill, tongs, serving tray and even corn which fits in their hands.

Both girls have flowing hair, cool shoes, and colorful dresses. Frankie is eight inches tall while her sister is a shorter five and a half inches. Alivia has a younger look with oversized feet (the younger kids have large feet – it’s a Monster High thing).

A flexible, fashionable Clawdeen doll includes a furry jacket and other accessories.

The daughter of a werewolf, Clawdeen is the fashionista of the group. She’s dressed in her best for the first day of school with a green top, purple pants and a black jacket with a furry collar.

She also has tons of fashion accessories including golden booties, golden moon necklace, and purple clutch. Her hair even has purple streaks. Plus, shoulder and knee articulation give you many posing and display options.

A full makeup kit, inspired by the Monster High characters, designed for kids 12 and older.

Looking for something different from a doll? Bring the Monster High look to life with this complete makeup kit. It includes four types of eyeshadow, four colors of lip gloss, nail polish, nail decals, and shimmer cream.

The kit also includes a variety of accessories such as hair bands, lip brush, hair extension, and even a detailed Draculaura doll. Everything fits inside the included Monster High locker-like carrying case for easy portability and storage.

Get cooking with Draculaura and her dad in this large kitchen playset with oven, stove and more. 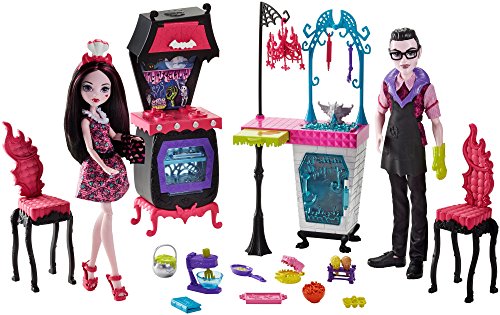 Draculaura and her father, the infamous Count Dracula, are cooking up a feast for the entire Monster High crew. This playset includes an oven, stove, cabinet, sink and more. Plus, it’s filled with tons of kitchen accessories, each with a ghoulish twist.

Each kitchen appliance has multiple moving parts and functions. The sink opens to reveals a dishwasher, the counter extends and more. You can even hang a bat-decorated dishtowel from the oven’s handle.

Both Draculaura and Dracula are detailed with several accessories including a purse, glasses and cooking apron. While you can find many different Draculaura dolls, this is the largest playset to feature her family and home.

With two heads, a shared body and glow-in-the-dark accents, Peri and Pearl Serpintine stand out from the crowd. 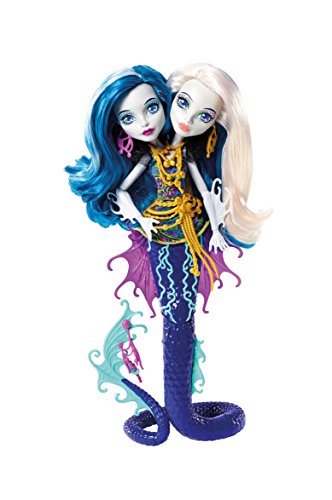 You’ve never seen a doll quite like this. Peri and Pearl are twin sisters who share a body, but each has a mind all her own. The two-headed daughter of Hydra, Peri and Pearl are relatively new characters, making them a great choice for kids who already have an extensive collection of Monster High Dolls.

The serpentine tail provides a stable base so the doll can easily stand on its own. Aside from their detailed necklaces and flowing locks, the doll also has glow-in-the-dark accents on her clothes and hair.

It’s a school bus with a ghoulish attitude capable of holding up to six Monster High dolls. 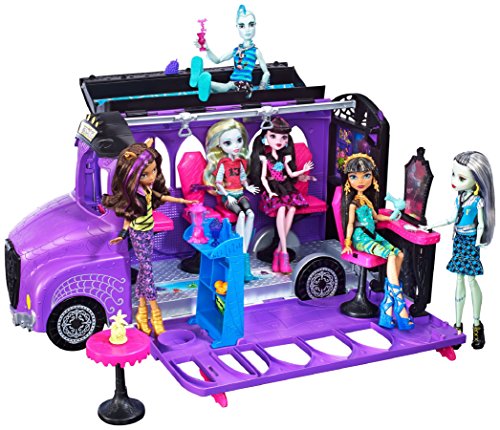 The Monster High girls travel to school in style with this deluxe bus which fits up to six dolls. But it’s not just a bus. It also unfolds into a spa playset complete with a smoothie bar, mirrored vanity and piranha pedicure station.

Note that the bus does not include any dolls. Also, only the standard size dolls such as the Ghoul Spirit line fit into the seats and chairs.

What is Monster High?

Created in 2010 by Mattel, Monster High is a unique line of dolls, accessories, books, and shows. It centers on a group of teen girls attending high school. Every girl is a type of monster such as a vampire, werewolf and so on.

The Monster High style includes elements of classic monster movies, science fiction, and even goth culture. There are two styles of Monster High dolls. The original lineup is the Signature Line. It has the most toys, with new dolls released basically every year for four years.

In 2015, the Monster High characters underwent a bit of a reboot. An origin story called Welcome to Monster High reintroduced the characters. Plus, their look was updated with new faces which have larger eyes and softer features.

Most of the toys on our list are from the rebooted version. Generally, that’s the version most kids are familiar with. However, if you’re buying for a collector or long-time fan, you might want to select something from the original Monster High doll line.

Kids love the combination of frights and fashion. The dolls are a bit cooler than a Barbie doll. The Monster High characters have fangs, claws, wings and other features you won’t find on any other dolls.

Plus, the dolls often have changeable outfits with lots of accessories. Every bit of jewelry or clothing has a unique monster twist.

Who are the Monster High Characters?

All of the characters are the offspring of famous monsters. That concept actually plays a role in the story as the girls often feel pressure living up to their accomplished moms and dads.

Monster High has an ever-growing cast, but the three main characters have remained the same since the beginning:

She’s the daughter of Frankenstein’s Monster and the Bride of Frankenstein. Frankie is as known for her sweet, kind personality as she is for her clumsiness. She has black hair with white streaks and mint-green skin.

She’s Count Dracula’s daughter. A vegan vampire, she faints at the sight of blood. Draculaura usually wears some combination of pink, black and white.

She’s the daughter of a werewolf. Although she does have a temper at times, she’s also a loyal, furry friend. She’s the biggest fashionista of the girls, and her dolls usually have more accessories than the other two characters.

Parents can be a bit wary about Monster High dolls. Are they too scary for kids?

While there’s no right answer, the Monster High dolls are generally pretty tame. They never feature any blood or gore. Plus, the re-design has generally made them cuter and more doll-like.

The Monster High stories are always positive with an emphasis on friendship and teamwork. The girls deal with relatable issues involving family, friends and high school.

Generally, Monster High dolls are appropriate for kids in junior high or the later years of elementary school. Kids in high school are usually too old to enjoy playing with dolls. However, younger kids are often interested in high school, and Monster High can help them learn what it’s like.

Monster High dolls combine cool monsters with contemporary fashion. They have a far different look than, say, a Barbie doll – and that’s a big part of why they’re so popular. If you know a child who loves Monster High, a gift from the list above is sure to make them scream… for joy!