All children beg to have their own puppy. If you have an animal lover, but real pets aren’t an option, check out MEVA PawPals’ fun solution. This company designs realistic animals that move and behave like real animals.

Your child is sure to enjoy spending hours taking care of their pet. Who knows? Maybe it could teach them how to take care of a real one later on.

PawPals is the name of a line of electronic pets that act and sound like the real thing. It’s an excellent solution for children who don’t get to enjoy the special bonding that can take place between a child and their pet.

These toys operate on three triple A batteries, which are included when you purchase the toy. When the batteries die, you replace them with new ones by accessing the panel on the puppy’s belly.

While adorable, these toys are not waterproof, so you might want to be sure your kiddo takes their puppy for a walk indoors or on dry ground. These toy dogs do not work that well on unstable ground, including thick grassy areas. 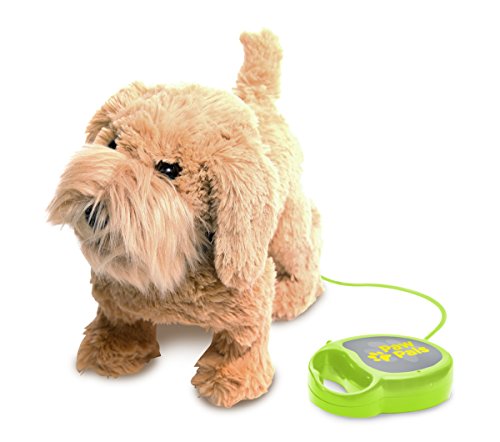 When you’re deciding on a toy puppy for your child, there are some things you’ll want to consider. Meva makes every effort to ensure that your child’s new friend is just like the real thing.

There are three different colored puppies to choose from – white, black, and tan. Each pooch comes with a leash that attaches to the remote control. They all come named Toby, but you can certainly allow your child to come up with their name if they prefer.

This product is simple to use, so it’s ideal for younger children. The appropriate age range would be between four and eight. My nine year old will pick it up to play with his little sister when she begs him to, but it isn’t a toy he’s going to go out of his way to play with on his own.

The remote, which is attached to the leashed, allow Toby to walk, bark, and wag his tail, all at the push of a button. He stands nine inches tall and is eleven inches long. He weighs less than two pounds, so he’s small enough for young ones to tote around.

However, there is a warning for choking hazards, so this product would not be ideal for children under three. When walking, Toby does not move very fast, so it might not be attractive to children who are wanting a toy that runs.

It has a short 26 ½” (inch) leash, which could make it difficult for taller children to operate comfortably. Be sure to watch young children who snuggle with this cuddly pooch, so they don’t get tangled in the attached leash.

Each pup has long, shaggy hair and floppy ears. The tail is short and stands straight up and wags when the button is pushed. The boy pooches have a bowtie around their necks. If you’re looking for a girl dog, the white puppy comes with two pink bows in her hair and a pink leash. Boy dogs are available in black or brown with red bowties or red bowties and leashes.

The head is entirely plush, so your child won’t be uncomfortable laying on it, but that also means there are no movements of the head or mouth. When the dog barks, it won’t appear realistic.

The puppy has two large plastic eyes with a plastic nose. The mouth is stitched closed. There’s even a fluffy beard on top of their noses to give them an adorable appearance. Your child is sure to love brushing and styling their pup’s coat.

You can feel the mechanics in the legs, which make them a bit hard but not uncomfortably so. The battery pack is secured by a screw and covered with a velcro flap. When it’s closed, you won’t feel or see the box.

Meva PawPals is a must-have for all animal lovers. It’s a great way to let your child experience what it would be like to take care of a real pet. But it’s also a great solution for children who can’t be around the real thing. Your child is sure to enjoy spending hours walking and loving on little Toby. Make him part of your family today!

Overall, I’d give Meva PawPals a four out of five-star rating. While the concept is interesting, the pup doesn’t do a variety of things. It has simple functions like walk, wags its tail, and bark. Younger children are sure to enjoy it, but older children won’t find much appeal.