Slime has been a favorite among kids for a long time. Even some adults make their own slime to help relieve stress. If you don’t feel like making your own slime and having to clean up a huge mess, there are a lot of slime kits online that will entertain your kids (and maybe you too).

After looking around online for the best slime kit, I found the National Geographic Mega Slime Kit & Putty Lab. This kit is an Amazon Choice, has excellent reviews, and is a great price. The manufacturer markets this kit as not just a toy, but a lab that kids can conduct experiments in and learn more about what slime is.

This slime lab probably isn’t the best for small kids, but it’s great for any other age group. The awesome thing about this particular slime kit is that it’s a learning resource, not just something for kids to make a mess with.

National Geographic is known for its science and education programs, and while it might not seem like a slime kit is one of those things, your kids can learn a lot from the National Geographic Mega Slime Kit. That’s one of the things that attracted me to this product. I wanted a toy that would not just be something to fill up time, but that would provide some value to my kids.

One of the great things about this slime kit is that it comes with several different kinds of slime, eight to be exact. Your kids can not only play with each one but learn about the science behind all of the different varieties of slime that come in this kit.

Even kids need a stress reliever sometimes, and this slime kit is a great way to loosen up. Each different kind of slime has different properties, which will keep your kids engaged and learning, all while relaxing. 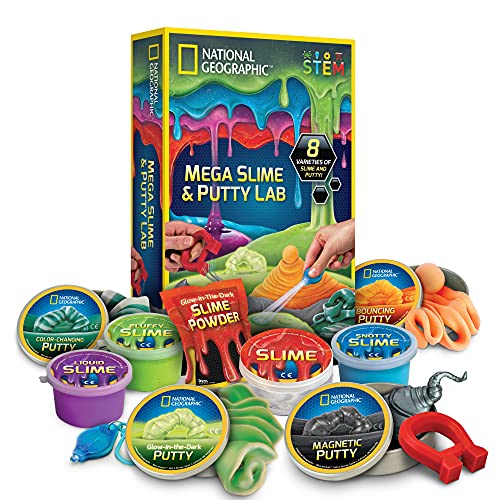 If you’ve tried making slime at home with your kids, you know that it usually doesn’t go well. Making your own slime often just ends up with a mess, and the slimes dry out after a day. Pre-made slimes typically last longer, and that’s what I was hoping for when I bought this kit.

I’ll admit that I was skeptical of how long the slime would last, but it’s been over a week, and the slimes are still slimy and not crumbling. Another great thing that I like about this kit is that it is educational as well as fun. I’m happy that my kids are learning about science while they’re playing; that makes me feel better about how they’re spending their time.

After receiving this slime kit, I saw that there was a warning about some chemicals that are contained in the slimes. I wasn’t planning on letting my kids eat the slime, and I figured that there are some chemicals in everything, so I wasn’t particularly worried. But that is something that is obviously not mentioned in the product description.

Overall, I have been delighted with the National Geographic Mega Slime Kit & Putty Lab. My kids are very interested in science, so I like how this kit comes with an educational guide that keeps them learning while they are playing.

The slimes have also held up pretty well, given the amount of time that my kids spend playing with them. I did expect them to dry out eventually, but it has been a couple of weeks, and they still look good, given that you store them correctly.

This slime kit turned out to be the perfect toy for my kids who love science. All kids love slime, but if there’s an opportunity for them to learn, even better, in my opinion. The National Geographic Mega Slime Kit is a great price, so you don’t have anything to lose by ordering it for your kids.

If you have kids that love science, the National Geographic Mega Slime Kit is a great way to keep them intrigued and educated at the same time. I give this product 4 stars; I think it’s excellent, and my kids love it, but the description from the manufacturer does say “non-toxic” specifically, and what you get isn’t completely non-toxic, according to the product label.