Legos have been a kid favorite for decades. My son has hundreds of tiny plastic blocks, which I often find strewn around the house, much to the dismay of my tender feet. He loves to collect different sets and themes, including the Marvel Super Heroes Showdown between Spider-Man and Scorpion.

Legos are small plastic blocks that you stack on top of each other to create different things. There are dozens of different themes and sets. And when you get bored playing with them as they are, tear them apart and make something new.

There are different types of Legos for different age groups. For the younger ages, there are thick, big blocks that are easy to stack and often are brightly colored. As children get older, the blocks get smaller, and the designs get more intricate.

Legos are so popular there’s even a TV show on prime time that has teams of adult designers who compete to make the best Lego designs. At the local zoo near our house, there’s often sculptures of animals made out of thousands of Legos and hundreds of hours of time and effort. They’re cool to view.

You may also be interested in: 13 Best Spiderman Toys of 2021 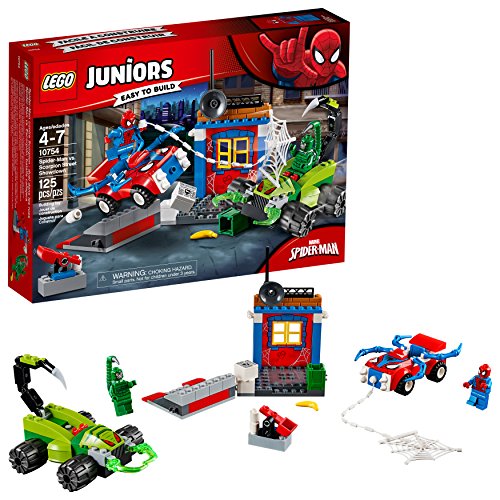 If you have a junior-aged child that loves superheroes, vehicles, and legos, the Marvel Super Heroes Showdown between Spider-Man and Scorpion set will bring them hours of fun. Legos allow children to use their imaginations and improve their cognitive and critical thinking skills.

What I particularly love about the Legos brand is that the small blocks are universal. You can mix different sets and have a huge party. My son often likes to do Star Wars, Spiderman, and Jurassic Park inside his Hogwarts lego house.

The Marvel Junior Super Heroes Showdown between Spider-Man and Scorpion set comes with 125 pieces, including both Spiderman and Venom figures. This set is ideal for children ages 4-8. Some of the features we love include:

This set also comes with both Spiderman and Venom figures and instructions on how to build a wall with a roof, a window that opens, and places to put the included web attachments for creative play. The building stands four inches high, three inches wide, and two inches deep.

The great thing about this set is that it comes with the bad guy and villain, so if this is the only set your child has, they can still have a way to act out different scenes. Your child could play both roles by himself, or he could play with his sister.

Let them learn how to work together to assemble the set and then watch them take turns being the bad guy and later play the good guy the next time. If your children are stuck indoors during foul weather or after dark, Legos are a great way to pass the time and stay entertained.

Legos are an affordable, kid-approved toy that appeals to all ages. Whether you’re looking for a present for a holiday or your child is wanting a toy they can purchase with their earned allowance, you can’t go wrong with Lego sets like Marvel Super Heroes Showdown between Spider-Man and Scorpio.

Many Lego sets can be put together without parental assistance, but make sure you check the box for the recommended ages. Some sets are more appropriate for older children, as there are lots of small pieces, which can pose a choking hazard for younger ages. And they are harder to handle, which isn’t ideal for children with less developed motor skills.

However, the Marvel Super Heroes Showdown between Spider-Man and Scorpion has larger pieces and is easy to put together, which makes it perfect for junior aged children. Your kid should have no problem assembling the product without help, although if they’re on the younger side, you might have to provide a bit of assistance at times. I always enjoy the bonding time.

Get Legos for Your Child

My son is a Lego Master, and he’s got dozens of different sets, including the Marvel Super Heroes Showdown. Overall, he seems pleased with it, although it is a bit too simple for him now that he’s older. I’d give this product a 4 out of 5-star rating for children aged four through eight. Grab a Marvel Super Heroes Showdown between Spider-Man and Scorpion set for your kids and watch them play for hours.