LEGO sets are an awesome option for your creative kids, but the larger sets can often be pricey. I was looking for something that my kids could build in real life (not on the computer) that would help them be creative and wasn’t going to cost me a fortune.

I found this LEGO Minecraft The Zombie Cave 21141 Building Kit on Amazon, which is an Amazon Choice and also has five full stars, so I decided to order it. I thought it would be a good starter kit for my kids since they are younger, and there are not quite as many pieces in this set as there are in others.

Because this LEGO Minecraft kit isn’t as complicated or massive as some of the other sets you see online, it’s an excellent choice for younger kids who are looking to get started with LEGO. Two hundred and forty-one pieces might seem like a lot until you compare it to the thousands of pieces that you’ll find in other sets.

For this reason, this LEGO set is great for beginners. However, the LEGO pieces are still pretty small, so if you have super young kids who like to put things in their mouths, you might want to opt for another toy.

I liked this LEGO set because my kids like to play Minecraft on the computer, and I wanted them to spend a little less time on the computer. I thought this would be intriguing since it’s still the topic of their favorite game; they just have to build things with their own hands.

This Minecraft LEGO set may be on the smaller side, but it has a lot of cool features that help keep your kids entertained.

This LEGO set is a ton of fun on its own, but another great thing about it is that there are several more Minecraft sets, so your kids can collect them and keep building them together. 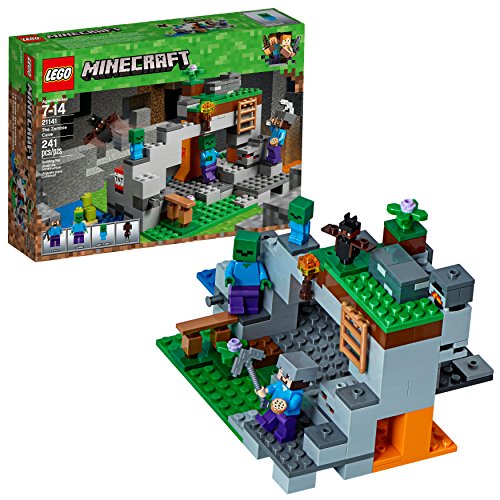 I always have a lot of faith in LEGO products, so I wasn’t worried about ordering this particular set. However, I was a little concerned that because the game was on the smaller side, that it wouldn’t keep the kids entertained for very long. However, it’s a good value, so I decided to order it.

After the kids used it for the first time, I was impressed, as I always am, with LEGO products. If you have kids that love LEGO, they won’t have any problem putting this set together by themselves. It’s not very complicated and allows for a lot of creativity since it’s not a huge set.

I don’t think my opinion changed after my first impression. I do wish that the kids had other sets to go with this Minecraft one, but it’s never a bad thing to have them play with one game and then get another later on.

The instructions that come with this particular set are straightforward for even younger kids to understand on their own, as LEGO instructions usually are. Still, it definitely helped to have kid-friendly instructions. Not all toys do, so it’s worth mentioning that LEGO does a great job with directions.

It didn’t take the kids long for them to put the LEGO Minecraft The Zombie Cave 21141 Building Kit together for the first time, so if you’re looking for something that is going to be more long-term, you probably want to opt for a larger set. However, because you can rebuild this set, the kids are still playing with it after a couple of weeks.

After watching the kids play with this LEGO Minecraft set for a while, I’m still happy with my purchase. It’s nice not to have to spend a couple of hundred dollars on a toy and still get close to the same result as if you had.

That being said, I will most likely be ordering more Minecraft LEGO sets to go with this one since it does lose its appeal after a while. But overall, this set is excellent for keeping creative minds at work and getting a much-needed break from technology.

This Minecraft LEGO set was definitely worth buying. It’s not a crazy price, has consistently high ratings, and gets great responses from kids. For all of those reasons, I give this toy five stars.